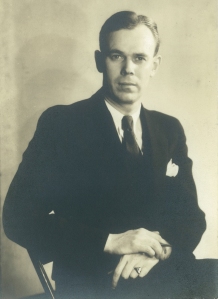 Henry L. Fisk was one of Iowa’s most prominent & prolific mid-century modern architects.

Fisk practiced in Iowa City from 1934 until his death in 1962. For most of those years he was Iowa City’s only registered architect. Roland Wehner joined him as an apprentice in 1956, and became a certified architect—and then Fisk’s junior partner in 1960.

Early in his career, Fisk worked for firms in Philadelphia, Washington D.C. and Des Moines. Each gave him practical experience with many architectural styles, acquiring a good breadth of experience before he hung his shingle in Iowa City. All of this happened during the Great Depression, so Fisk certainly had to be willing to work on any kind of project and a very versatile architect to survive.

His early work in Iowa City ranged from a French/Norman country manor, an English Tudor cottage, and American Colonial homes to his consulting work on the Kruse & Klein Moderne design of the Iowa City Press-Citizen building.

“With Fisk you always get a surprise.”

In the mid 40’s, he started to experiment with a new style that has become known as mid-century modern. He was one of the first architects in the Midwest to embrace and adapt the style. Most of his designs from that point on were modern. Innovations in glass technology allowed architects to work with larger planes of glass than was previously possible, and Fisk took great advantage of this. All his homes feature huge windows and enormous views – that is, from the back. Fisk’s designs tend to be modest and unassuming from the street, yielding a definite treat when one goes inside! As his junior partner Roland Wehner once said, “With Fisk you always get a surprise.”

The surprise is often the windows or the view. But it could also show up as hidden cove lighting, an interesting built-in planter, or a cleverly disguised rubbish bin. Most Fisk homes also feature a large amount of built-in storage. Fisk didn’t just design exteriors. He was very interested in the interior space and liked to recommend paint colors and finishes, sometimes even providing draperies or carpet.

Some of the notable structures in Iowa City that he designed include the original Towncrest shopping plaza, and the Iowa City Airport terminal. With his partner Roland Wehner (still alive and kicking in Iowa City!), Fisk designed the Iowa City ‘Civic Center’– City Hall and the Fire Station downtown. They also designed the Robert A. Lee Recreation Center together, not long before Fisk’s sudden death (from a heart attack), in 1962.

Fisk designed many residences throughout his career, and they are scattered throughout the Iowa City area, with concentrations in Manville Heights and River Heights. (Fisk was one of the original developers of River Heights). You can check out many of the local homes Fisk designed by exploring his Residential Designs on the Designs page.

Many schools in the area were designed by Fisk, or Fisk & Wehner. These include many of the buildings at Scattergood School in West Branch. Church and bank designs, their additions and renovations also provided much of the work for Fisk or Fisk & Wehner. To explore these designs, check out Fisk’s Commercial Designs on the Designs page.

If you know of a Fisk designed home or building, please contact us! We are always curious to find more Fisk designs. There is no complete set of records for his work, especially before Roland Wehner joined the practice.